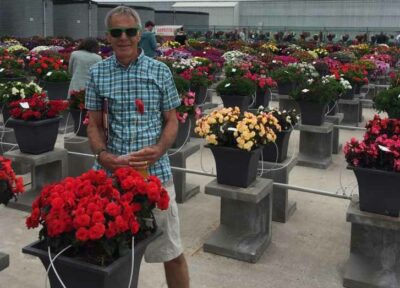 Alan and Karin Bourne bought Perrywood Tiptree from Alan’s parents in 1984. Alan turns 70 years old on Saturday 3rd April, so we thought we would share some photos and facts about his life. He has lived most of it in a house next to the garden centre.

When Alan was born, his dad Les worked at Braxted Park. They lived in a house called Pundicts on the estate. Four years later, Les bought Perrywood, which at the time was a 4-acre smallholding.

They grew field crops and had a few animals to make a living from the land. Les, wife Mary, son Alan, and his two sisters lived in a bungalow on the site. 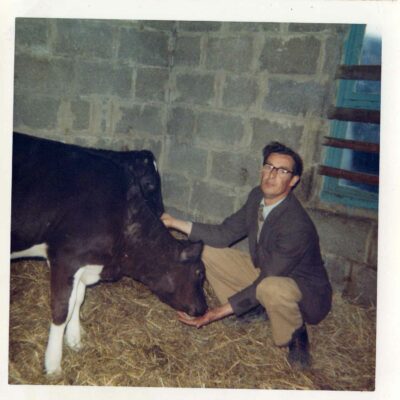 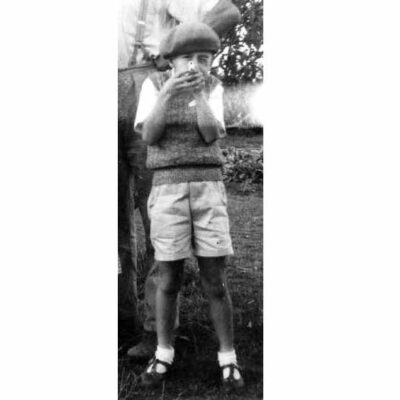 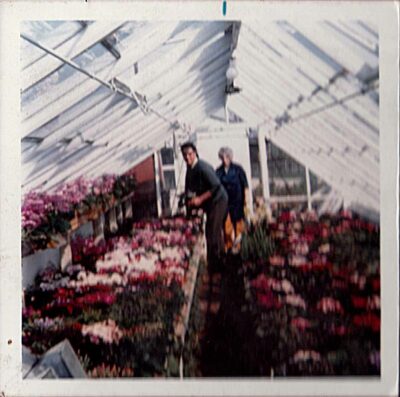 Alan left school as soon as he could at 16. He went to work at Colchester Parks Department, also attending a course at Writtle College. During this time, he became very interested in growing in greenhouses. They grew plants for the colourful bedding displays in Castle Park and arranged them for Colchester Town Hall events, including the annual Oyster Feast.

Alan then went back to the family business at Perrywood, encouraging his parents to invest in some greenhouses. He could see that these crops were worth more money than field crops. By the time Alan turned 20, they had four greenhouses and a polytunnel. 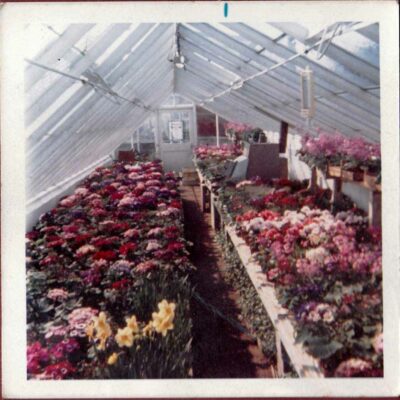 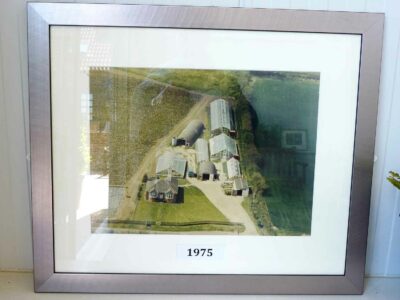 During Alan’s 20s he worked with his Dad, Les, to build more greenhouses and buildings at Perrywood. They did all the jobs themselves, becoming plumbers, heating engineers, brick layers, and electricians along the way. There was little or no budget to employ contractors.

Outside of work Alan got married and moved to Tiptree, then Messing. Alan and Karin Bourne bought Perrywood Tiptree from Alan’s parents in 1984. They moved there with their three children Hannah (6), Simon (4), and Tristan (2), taking their belongings by tractor and trailer. The family moved into a static caravan whilst the bungalow was converted into a house. Alan worked seven days a week. 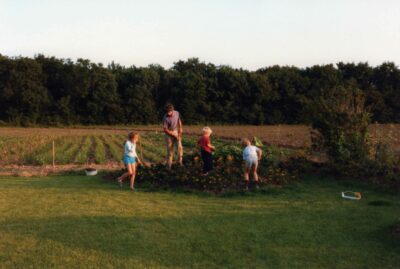 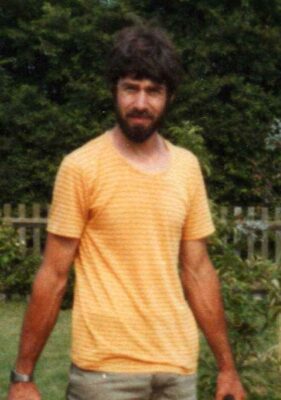 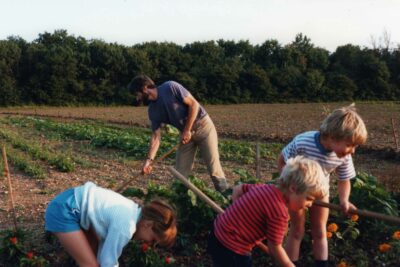 During Alan’s 30s, Perrywood Tiptree (then called Perrywood Nurseries) scaled up and became well known for being a garden centre selling good quality plants. Alan and Karin started selling products such as pots, canes, and compost from this shop which you may recognise. Their hanging baskets became popular, and customers brought in their empty baskets to be replanted – a service we still offer today!

In 1986 and 87, the storms and hurricanes destroyed several greenhouses and polytunnels, which looking back, became a positive catalyst for expansion. They could have scaled back or given up, but they chose to invest in new greenhouses and have been investing in new buildings ever since. It became a running joke in the family that Alan always wanted a new greenhouse for Christmas.

Some extremely harsh winters were challenging. Before bed every night Alan would go round to every greenhouse and check the temperamental boilers were still working. 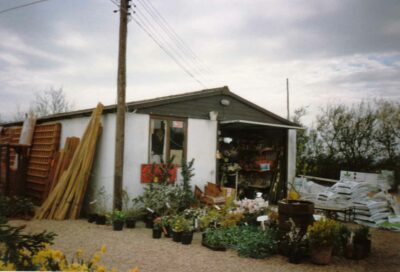 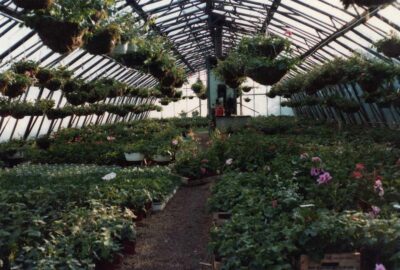 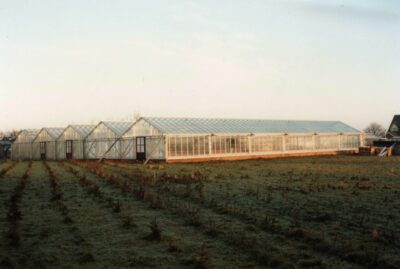 During Alan’s 40s, the expansion continued. The polytunnel shop replaced the small shed, and in turn, it was replaced with a greenhouse shop. Alan and Karin continued to evolve their roles in the business, working with a growing team to do whatever was needed to make it a success. They were very hands-on.

The creative displays came in, and Horticulture Week magazine featured one of the inspiring gardens – a taste of things to come. In 1999 the Coffee Shop was built, opening in 2000. We can’t imagine a time without it now! Alan and Karin designed the décor and the menu and employed a manager to run it.

Hannah, Simon, and Tristan were now teenagers and spent their weekends and holidays working in the garden centre or the nursery. 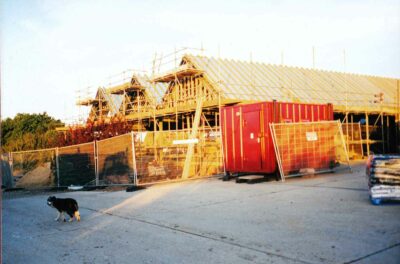 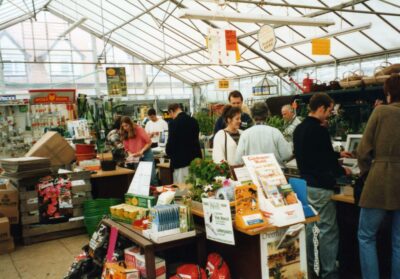 From 2001 to 2011 Perrywood underwent significant change. Yet more building work and more greenhouses. Lots of work to expand and make the company more professional.

After working in mechanical engineering, son Simon came back into the business as Garden Centre Manager in 2008. He managed the build of the new shop. This was a huge event for the family and we all came along to the grand opening. The new building meant we could sell more gifts and Christmas products which enabled us to employ team members year-round, not just for the busy Spring period.

Daughter Hannah began working for the business as a freelancer from 2010, using her marketing knowledge to update the logo and marketing materials. 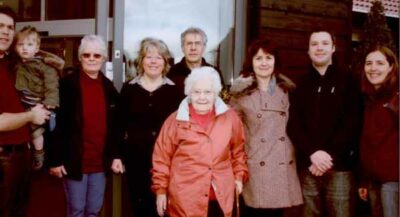 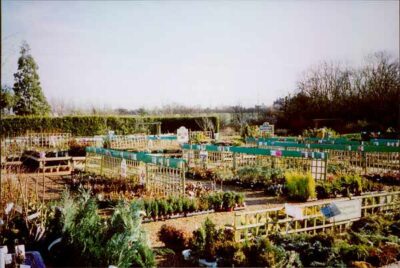 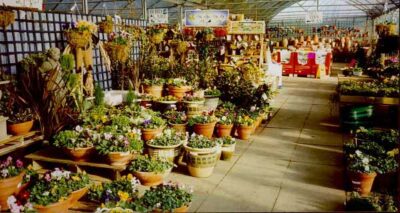 Alan and Karin celebrated their 30 years in charge of the business in 2014, and Karin has since retired from her day-to-day responsibilities.

Son Tristan is now back in the business and Alan has handed on some responsibilities to all three children, who are now Directors. Alan maintains his responsibilities for Plant Buying, and (normally) enjoys travelling to nurseries round the UK and Europe to find the best plants. He is very involved in the production nursery, sharing his years of growing knowledge.

We have won numerous awards in the last decade and for two years running been announced as the 3rd best garden centre in the UK in the Garden Centre Association Awards! There are now around 170 in the Perrywood team at Tiptree, but we work hard to retain a family feel.

In 2018 we bought a new garden centre in Sudbury. Announcing the news to all the team at Tiptree some of them thought we were going to announce that Alan was retiring! Far from it, Alan has thrown himself into bringing the growing areas back to life there, and planting lots of trees for future generations to enjoy. His passion for plants, and for the business, is as strong as ever. 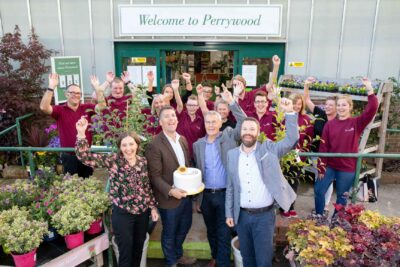 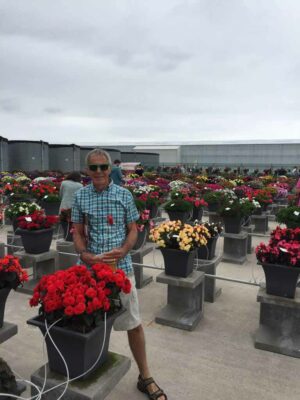 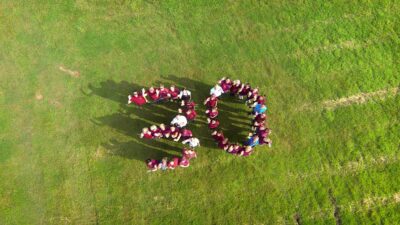