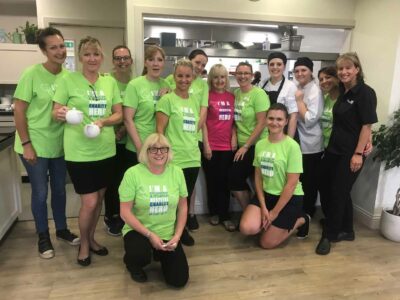 It’s been yet another busy year at Perrywood Tiptree with over £12,000 raised so for our nominated charities. So far, we have raised:

We appreciate all the support from our customers and staff in raising this fantastic sum. Here are just some of the highlights of the year so far…

In March, over 100 customers and staff joined us for quiz night in our Coffee Shop & Restaurant, and the event raised over £1,500 for Greenfingers Charity, a fantastic charity that creates magical gardens for children’s hospices.

Also in March, Nikki from our Coffee Shop & Restaurant took on the challenge of the Colchester Half marathon raising £635, which was then doubled by Perrywood to raise £1,270 for Colchester & Ipswich Hospitals Charity.

In July, Hannah and her family took part in the Walk for Wards, a 5k walk along the sunny coast of Felixstowe raising a further £340 for Colchester & Ipswich Hospitals Charity.

Our Colchester & Ipswich Hospitals Charity tea party held in our Coffee Shop & Restaurant in July was a really uplifting event with a further £1,300 raised.

Our staff summer party in August was a very entertaining evening and a chance for all our hardworking staff to let their hair down! The raffle raised over £300 for Kids Inspire.

The Coffee Shop & Restaurant team deserve a special mention. Every year, they donate their tips to charity. So far this year, they have raised over £4,000 for Colchester & Ipswich Hospitals Charity. Initially, they raised £1,000 to purchase a year’s supply of dominoes, playing cards, colouring pens, white boards and photo albums for dementia patients at Colchester Hospital.

More recently, they raised £1,500 to buy some fabulous new activity equipment, including this games table, for the Children’s wards.

They are currently raising £2,600 for two children’s heart monitors for the Cardio-Respiratory department with £1,850 raised so far.

All in all, it’s been a fabulous year so far! Our next fundraising event will be the Kids Inspire charity quiz night on Thursday 17th October in the Coffee Shop & Restaurant – more information and book tickets. We promise you a fun-filled evening!